Add to favourites
Palace Towers, Palace Grounds Road, Hamilton, South Lanarkshire, ML3 6AD
Photo of Vue Hamilton
Whilst every effort has been made to ensure the information displayed here is accurate, always check with the venue before attending (especially during the Covid-19 pandemic).

The Banshees of Inisherin

A lifelong friendship is abruptly ended with disastrous consequences.

A woman finds out that her rental apartment hides some dark secrets.

Batman must stop Penguin becoming Mayor of Gotham, all whilst deciding what he should do with the new Catwoman.

Spin-off from Shazam! gives Dwayne Johnson the opportunity to lead a superhero franchise.

While mourning the loss of their king T'Challa, the people of Wakanda must defend their nation from invaders.

A young outcast must learn to live on the boundaries of society, alongside some unsightly folk.

Experience the magic of the CBeebies Christmas Show on the BIG CINEMA SCREEN, with additional Exclusive Content featuring your favourite CBeebies stars!

The show will be sprinkled with plenty of CBeebies magic, festive music, stunning dance performances and a star cast of CBeebies presenters and on- screen talent, making it an engaging theatrical spectacle for all the family.

A Christmas Carol: A Ghost Story

Mark Gatiss (Sherlock, Dracula, Doctor Who) stars as Jacob Marley in his own ‘Irresistibly theatrical’ (★★★★★ The Telegraph) retelling of Dickens’ classic winter ghost story, A Christmas Carol, alongside Nicholas Farrell (Chariots of Fire, The Crown, The Iron Lady) as Scrooge. This powerful tale of life, love, loss, and redemption is as relevant today as when it was first published 179 years ago. Filmed live for cinemas during the 2021 stage run at London’s sumptuous Alexandra Palace Theatre and filled with Dickensian, spine-tingling special effects, prepare to be frightened and delighted in equal measure as you enter the supernatural Victorian world of A Christmas Carol: A Ghost Story on the big screen. It’s a cold Christmas Eve and mean-spirited miser Ebenezer Scrooge (Nicholas Farrell) has an unexpected visit from the spirit of his former business partner Jacob Marley (Mark Gatiss). Bound in chains as punishment for a lifetime of greed, the unearthly figure explains it isn’t too late for Scrooge to change his miserly ways in order to escape the same fate, but first he’ll have to face three more eerie encounters…

Buddy (Ferrell) is a big Elf who, though accepted in his Elvish community at the North Pole, manages to wreak havoc on a daily basis. Fed up and confused by his charge, Papa Elf (Bob Newhart) sends him to the US in search of his true identity. Hilarious and puerile Yuletide comedy.

An alternative Christmas treat chosen by you. When Kevin is accidently left Home Alone he is forced to protect his house from a pair of bungling burglars.

Peter and Kate McCallister (Heard and O'Hara) have an eight-year-old brat and wisely – albeit accidentally – leave him behind in Chicago when they go on holiday to Paris. Left to his own devices young Kevin (Culkin) has to deal with two bungling burglars (Pesci and Stern) who threaten to invade his peaceful haven. Jolly, if sadistic, scare-comedy antics produced by teen flick veteran John Hughes.

Based on the best-selling book series by Bernard Waber, Lyle, Lyle, Crocodile is a live-action/CGI musical comedy that brings this beloved character to a new, global audience.

When the Primm family (Constance Wu, Scoot McNairy, Winslow Fegley) moves to New York City, their young son Josh struggles to adapt to his new school and new friends. All of that changes when he discovers Lyle - a singing crocodile (Shawn Mendes) who loves baths, caviar and great music-living in the attic of his new home. The two become fast friends, but when Lyle’s existence is threatened by evil neighbor Mr. Grumps (Brett Gelman), the Primm’s must band together with Lyle’s charismatic owner, Hector P. Valenti (Javier Bardem), to show the world that family can come from the most unexpected places and there’s nothing wrong with a big singing crocodile with an even bigger personality.

Lyle, Lyle, Crocodile will feature original songs performed by Shawn Mendes and written by the songwriting team behind The Greatest Showman.

Musical adaptation of Roald Dahl's book about an extraordinary girl with a sharp mind and a vivid imagination.

Young couple Margot and Tyler travel to a remote island to eat at Hawthorne, an exclusive restaurant run by celebrity chef Slowik, who has prepared a lavish menu where food is treated as conceptual art, but his approach to cuisine has some shocking surprises for the wealthy guests.

Mia and Me: The Hero of Centopia

When Mia discovers that she's part of an ancient prophecy, she must travel through Centopia and fulfill her destiny.

It's Christmas time, and nasty old miser Scrooge (Caine) needs to be taught a lesson by three seasonal ghosts. Colourful version of Dickens' classic tale that will please the kids and keep the adults smiling with its little irreverent spices.

The Nightmare Before Christmas

Jack Skellington, the skinny trickster king of Halloweentown, is restless with success and needs a new challenge, so he hatches a plot to kidnap Santa and creates a mixed-up Yuletide which isn't quite what the kids expected. Produced and based on a story and characters by Tim Burton.

The legendary singer, Uta, is going to perform live. Luffy and the Straw Hat Pirates have to be there.

The story of the New York Times investigation into Harvey Weinstein's history of abuse and sexual misconduct against women.

This family are legendary explorers. Everything that makes them different, threatens the success of their latest mission.

Tad the Lost Explorer and The Curse of the Mummy

Tad sets out on a new adventure but accidentally curses everyone! 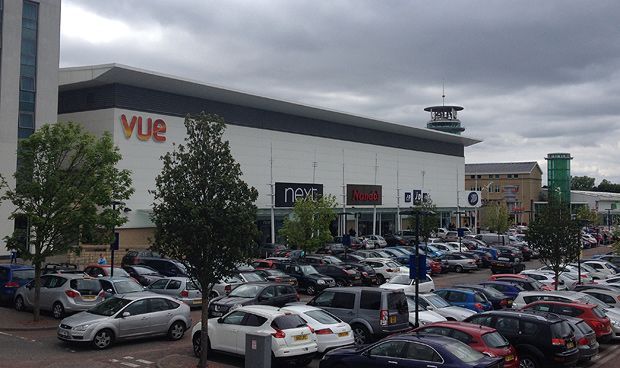 This nine screen cinema is well served by the neighbouring restaurants of Palace Towers.