Add to favourites
Silk Street, London, EC2Y 8DS
Photo of Barbican Centre
Whilst every effort has been made to ensure the information displayed here is accurate, always check with the venue before attending (especially during the Covid-19 pandemic).

On the publication of his new book On Bramante, Pier Paolo Tamburelli (Baukuh Architects) considers the work of the celebrated Italian Renaissance architect Donato Bramante.

In his first film about an openly gay man, Terence Davies casts Jack Lowden and Peter Capaldi to play poet Sassoon as a young man and in later life. Convalescing in a veterans’ hospital, and conveniently out of the public eye after publishing work that was sharply critical of the military decision-makers, Sasoon meets Wilfred Owen, a tender first relationship (if more of mind than body).
Davies counterpoints key moments in Sassoon’s life – his relationships with Ivor Novello and the aristocrat Stephen Tennant, as well as his later marriage to a woman – with beautiful readings of his poetry over montages of real images of soldiers in wartime. Featuring a wonderfully understated performance from Lowden, it’s a moving tribute to Sassoon, who grew to old age with bitter regret, having been unable to love and desire freely.

Step inside a glamorous Parisian ballroom in this stunningly original virtual reality show, as a timeless love story unfolds around you in an unforgettable experience from choreographer Blanca Li.

A Ukrainian military surgeon is captured by the Russian military forces in the Donbass region in Valentyn Vasyanovych’s brilliant, disturbing drama, set in 2014.

Kunle (Donald Elise Watkins) and his best friend, Sean (RJ Cyler), are both seniors in college about to embark on an epic night of Spring Break parties. Sean has the whole night planned out, including every party they will hit on their “legendary tour.” They return to their apartment to pre-game, yet find that their roommate, Carlos (Sebastian Chacon), has left the door open. As they enter with trepidation, Sean and Kunle discover a drunk, semiconscious White woman they don’t know on the floor. Worried the police will suspect them of wrongdoing, they try to get the woman to safety without drawing suspicion. What ensues is a chaotic, hilarious, and tension-filled chase all over town as our trio grapples with their differences while attempting to bring the woman to safety.

Everything Everywhere All at Once

Only Evelyn Wang (Michelle Yeoh) can save the world. To do it, she'll have to explore all the lives she could have led.

The latest gorgeous animation from Disney is a magical treat.

André J Thomas, one of the world’s greatest experts in Gospel Music, curates a celebration of music to nourish the soul.

Indie folk singer/songwriter from Dublin with a tremulous tone.

Bringing together musicians from different musical cultures and traditions in his all-star band, guitarist John McLaughlin performs with The 4th Dimension.

André J Thomas, one of the world’s greatest experts in choral music, unites the voices of gospel and community choirs from across London in a celebration of gospel music to nourish the soul.

Lise Davidsen is the definition of box office in the opera world right now. And we’ve got the perfect vocal partner for her in Freddie De Tommaso, ‘a young tenor of limitless promise (The Times).

Members' Yoga in the Conservatory

Join us for an energising yoga class in our Conservatory hosted in collaboration with Triyoga.

A new play by David Hare
Directed by Nicholas Hytner

Ralph Fiennes leads the cast in David Hare’s blazing account of the most powerful man in New York, a master manipulator whose legacy changed the city forever.

For forty uninterrupted years, Robert Moses exploited those in oﬃce through a mix of charm and intimidation. Motivated at first by a determination to improve the lives of New York City’s workers, he created parks, bridges and 627 miles of expressway to connect the people to the great outdoors.

Faced with resistance by protest groups campaigning for a very different idea of what the city should become, will the weakness of democracy be exposed in the face of his charismatic conviction?

A Relaxed Viewing of Postwar Modern

Postwar Modern features the work of many artists who moved to Britain as refugees from Nazism, in the bloody aftermath of India's Partition or as part of the 'Windrush Generation'. 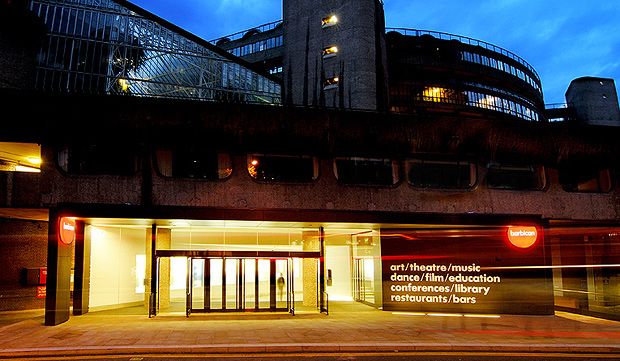 Europe's largest multi-arts and conference venue, the historic Barbican Centre leaves no creative stone unturned with a programme of art, music, theatre, dance, film and creative learning events. It hosts classical, opera and contemporary musical concerts and is home to the London Symphony Orchestra. The cinemas shows new and classic releases, including festivals and themed seasons whilst the creative learning events offer workshops, talks, tours and exhibition for families, young people and adults. The centre also contains a library, art galleries, three restaurants and a conservatory of tropical planets and exotic fish.

Barbican, St Paul’s and Moorgate underground stations are all within walking distance and the centre has four car parks on Beech Street and Silk Street.