Add to favourites
Free School Lane, Lincoln, LN2 1EY
Photo of The Drill
Whilst every effort has been made to ensure the information displayed here is accurate, always check with the venue before attending (especially during the Covid-19 pandemic).

Eddi Reader is perhaps Scotland's greatest living female voice. In 2022, she celebrates her 40th year on stage with a '40 Years Live' concert tour.

From her earliest years playing the folk clubs of western Scotland and learning how to street sing across Europe (like her hero Edith Piaf) Eddi's path soon lead her to a professional career in music as a backing singer for Eurythmics and Gang of Four. Her band Fairground Attraction had huge international success and number one hits with 'Perfect' and debut album 'First of a Million Kisses' which stormed the charts in the late 1980s.

Throughout her successful solo career, Eddi has released consistently great works, including highly acclaimed albums such as 'The Songs of Robert Burns' and last years 'Cavalier'. She has won Brit Awards, been awarded four honorary degrees, an MBE, sung to millions on some of the world's greatest concert and festival stages and collaborated with a host of stars across a myriad of genres including Folk, Jazz, Pop, World, Punk and even Classical work with various orchestras.

In 2019 Eddi was invited to be a special guest with Jools Holland's Rhythm & Blues Orchestra for an extensive tour, she released her 'Starlight' EP, played sold out headline shows, recorded a programme for BBC Radio's Classic Scottish Album series about her Robert Burns recordings and appeared on BBC Television's 'Songs of Praise' and as part of Billy Connolly's 'Made In Scotland' series.

The '40 Years Live' tour promises to be something special, as with any Eddi Reader show, the magic is being made in the moment, no two performances are ever the same.

In 2015 Ocean Colour Scene celebrated their 25th Anniversary with a sell-out acoustic tour of some of the most prestigious UK Concert Halls,  it was not only their most successful for 15 years, but also their best received, with ecstatic audience reactions every night.

Simon and Oscar are continuing the theme in 2022 with a tour of intimate seated venues, the perfect stages for their acoustic performances of all the big hits and anthems, including The Riverboat Song, The Circle, Traveller’s Tune, Hundred Mile High City and The Day We Caught The Train. These shows are the latest chapter in a remarkable career that’s seen OCS rise from Breton shirt-wearing Stone Roses disciples to one of Britpop’s biggest bands (their 1998 arena tour was the biggest by any UK group that year). In their 30 years together, they’ve enjoyed five Top 10 albums, six Top 10 singles and a mantelpiece full of awards. But behind all the swagger and the style were great songs, with words and melodies that found their way into your head and heart. It’s time to hear these songs again, stripped back but every bit as brilliant.

Controversial comedian known for his conservative politics, as seen on Question Time and Mock the Week.

Coming straight out of Newport The GLC are officially Britain’s biggest rap group. Known for classics like “Guns don’t kill people rappers do” and “Your mother’s got a penis”, The GLC started almost by accident around the turn of the century with Eggsy’s impromptu rap about his tracksuit over a serious piece of music Rhys was working on in the studio. Adam Hussain, Billy Webb, Mystkal, the Maggot, 2hats and Mike Balls convinced Rhys to record the rap. Fuelled by Lambrini, fags, Chicken Tikka Massala and weed they all took to the mic and The GLC’s first album “Don’t Blame the Chain” was born. And so it began, the journey which has so far seen The GLC rise to the top of the charts, perform around the world and at every major festival in the Western Hemisphere and make millions of people laugh along the way. Now many years since that first rap about Eggsy’s tracksuit, the boys are still keeping it real in the rap game and hold the title of the most successful UK rap act ever. To date The GLC have released 18 albums… and amazingly none of them have died yet. You knows it!

10cc man jointly responsible for hit 'I'm Not in Love', as well as songs that became hits for The Yardbirds, The Hollies and Herman's Hermits, tours his new solo material and impressive back catalogue.

A unique brand of 'bag rock' (that's bagpipes plus rock, if you were wondering) with stirring tunes and energetic performances. Expect everything from 'Flower of Scotland' to Coldplay's 'Clocks', via AC/DC and Deep Purple.

The Smiths Ltd was formed in Manchester, UK the hometown of The Smiths.

After an extensive search to find the perfect Morrissey, the band played their first gig to an audience of avid Smiths fans. The response was spectacular and the band now plays at venues and festivals all over the UK.

Highlights include playing in front of a 2500 capacity crowd at The Manchester Academy, 4000 on the main stage at Bestival, Camp Bestival, Kendal Calling and 15000 at Spike Island The Resurrection.

If you never saw The Smiths then this is your chance to experience the thrill of those great songs played live. If you were lucky enough to see them first time around then prepare to relive that excitement again.

Committed to getting the same energy that Morrissey, Johnny Marr, Andy Rourke and Mike Joyce had onstage together, the band are also obsessed about getting that live sound just right.

With an authenticity and provenance that’s hard to beat The Smiths Ltd are the ultimate tribute. The Smiths meant everything to a generation… To us they still do.

Fresh from finding and proving decisive links between IKEA, the CIA and the Nazi’s, Troy Hawke, 1930’s throwback homeschooled investigator Troy Hawke battle a new enemy on behalf of all people everywhere…the bastard saboteur that lurks in our own minds…

Beguiling audiences with humour, bold vocals, gripping storylines and innate musicality plus a growing reputation in the folk world for sublime a cappella harmonies. 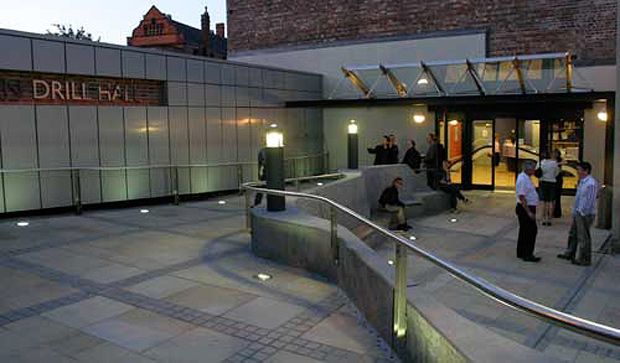 The Lincoln Drill Hall is an exciting arts and entertainment venue located just off Lincoln's high street. The venue hosts a wide variety of shows including, comedy nights, theatre performances, music gigs and much more.