Add to favourites
Preston Circus, Brighton, BN1 4NA
Photo of Duke of York's Picturehouse
Whilst every effort has been made to ensure the information displayed here is accurate, always check with the venue before attending (especially during the Covid-19 pandemic).

Anything Goes - The Musical

When the S.S. American heads out to sea, etiquette and convention head out the portholes as two unlikely pairs set off on the course to true love… proving that sometimes destiny needs a little help from a crew of singing sailors, a comical disguise and some good old-fashioned blackmail. This hilarious musical romp across the Atlantic, directed by the multi-award-winning Broadway director and choreographer Kathleen Marshall, features Cole Porter’s joyful score, including I Get A Kick Out of You, You’re the Top and the show stopping Anything Goes.

Berlin's decadent cabaret era is vibrantly brought to life as Dietrich's voluptuous singer Lola-Lola sets out to seduce and destroy a bourgeois schoolteacher. In her first major role, the actress taps into a potent current of female sexuality.

A rebellious Scottish princess defies her mother's marriage plans and unleashes a curse on her fairytale kingdom, then must complete a number of challenges in order to lift it. The kick-ass tomboyishness of Merida and luscious landscapes make up for a wavering story.

The Bravest Knight: Cedric and the Troll

An episode of The Bravest Knight. The gang learn new skills and reminisce about their past adventures.

You must remember this … Bogart being impossibly noble, Bergman torn between two lovers, Claude Rains playing both ends against the middle, devious Nazis, a fogbound airport, a piano-player tinkling that tune. A wonderful hill of beans.

While investigating the death of a man on a mountain, a detective meets the wife of the deceased. Her mysterious demeanour sends his investigations astray.

Anderson's inspired choice of stop-motion animation pays off in this beautiful and idiosyncratic adaptation of the well-loved children's tale. While kids may enjoy it, Anderson's typically arch humour is aimed more at their parents, who will also be impressed by the star-studded voice cast – Bill Murray as a badger lawyer anyone?

I Get Knocked Down

The untold story of the band, Chumbawamba.

Lang's masterpiece is a fascinating and intriguing film which follows the manhunt for a Dusseldorf child-murderer. In highlighting the procedurals of police organisations this was incredibly influential.

Lang's still stunning science fiction classic. The images of a futuristic city are as marvellously iconic and influential as ever. And the story, concerning a revolt in a society which splits the 'workers' and 'thinkers', still speaks volumes today.

Moana (Carvalho) is a plucky Polynesian girl who revives the voyaging tradition of her island tribe, with the help of buffoonish demigod Maui (Johnson, exuberantly sending himself up.) The unabashed positivity is pure Disney but Bush's zingy screenplay satirises the studio's princess obsession and there's a refreshing lack of a love interest. A spirited, vividly realised and genuinely rousing adventure.

World War Two is about to begin. John Halder, a German academic, struggles with the consequences of the movement he has joined.

Puppetry, magic and storytelling combine in a unique, Olivier Award-winning stage adaptation of Yann Martel’s best-selling novel. Filmed live at the Wyndham's Theatre in London’s West End and featuring state-of-the-art visuals, the epic journey of endurance and hope is bought to life in a breath-taking new way for cinemas screens.

An extraordinary new production of Shakespeare’s most enduring tragedy, directed by Clint Dyer with a cast that includes Giles Terera (Hamilton), Rosy McEwan (The Alienist) and Paul Hilton (The Inheritance).

She’s a bright, headstrong daughter of a senator; elevated by her status but stifled by its expectations. He’s refugee of slavery; having risen to the top of a white world, he finds love across racial lines has a cost.

Wed in secret, Desdemona and Othello crave a new life together. But as unseen forces conspire against them, they find their future is not theirs to decide.

Othello is filmed live on the Lyttleton stage of the National Theatre.

A man washes up on a desert island; when he tries to build a raft, it’s destroyed by a mysterious red turtle. Breathtaking début feature by Dutch writer, director and animator, a stunning, life-affirming tale of man’s relationship with nature, entirely worthy of the Ghibli name (the studio co-produced it).

Passions run high as Manrico and the Count di Luna compete for the affections of Leonora. Little do they know, Manrico’s mother Azucena has been keeping a terrible secret for decades. Soon a curse from the past will rise up from the ashes with devastating implications for them all. Starring Ludovic Tézier and Jamie Barton, Adele Thomas’s energetic staging sets Verdi’s tale in a Hieronymus Bosch-inspired universe of medieval superstition. Antonio Pappano conducts Verdi’s dramatic score, which features the famous ‘Anvil’ chorus.

Servants Figaro and Susanna are filled with excitement on their wedding day, but there’s a hitch: their employer, the Count Almaviva, has dishonourable intentions of his own towards the bride-to-be. With more twists than a page boy’s stockings, the story of Mozart’s comic opera will surprise and delight you at every turn. Come for the music and stay for the cross-dressing hilarity, all unfolding over the course of one crazy, topsy-turvy day in the Almaviva household. Royal Opera Music Director Antonio Pappano conducts a truly international cast in David McVicar’s timeless production.

The Sleeping Beauty holds a very special place in The Royal Ballet’s heart and history. It was the first performance given by the Company when the Royal Opera House reopened at Covent Garden in 1946 after World War II. In 2006, this original staging was revived and has been delighting audiences ever since. Frederick Ashton famously cited the pure classicism of Marius Petipa’s 19th-century ballet as a private lesson in the atmospheric art and craft of choreography. Be swept away by Tchaikovsky’s ravishing music and Oliver Messel’s sumptuous fairytale designs with this true gem from the classical ballet repertory.

In the court of Princess Turandot, suitors who fail to solve her riddles are brutally killed. But when a mysterious Prince answers one correctly, suddenly he holds all the power – and a glorious secret. When life hangs in the balance, can love conquer all? Puccini’s score is rich in musical marvels (featuring the famous aria ‘Nessun dorma’), while Andrei Serban’s production draws on Chinese theatrical traditions to evoke a colourful fantasy tableau of ancient Peking. Antonio Pappano conducts Anna Pirozzi in the title role and Yonghoon Lee as Calaf.

Two impecunious male musicians inadvertently witness the St Valentine's Day Massacre and take refuge in Florida with Sweet Sue and her Society Syncopators, an all-female band. Brilliant, brittle, crackerjack farce with all concerned at a peak in their careers.

Where the Wild Things Are

Maurice Sendak's nine-sentence children's tale about a boy whose bedroom turns into a forest full of huge creatures gets the Spike Jonze ('Being John Malkovich') treatment. Any joy here comes from the brilliant production design of the creatures - Jonze opts to use puppetry over CGI and this gives the action an ethereal quality. Unfortunately the creatures are emotional stereotypes and as such, lack dimension. 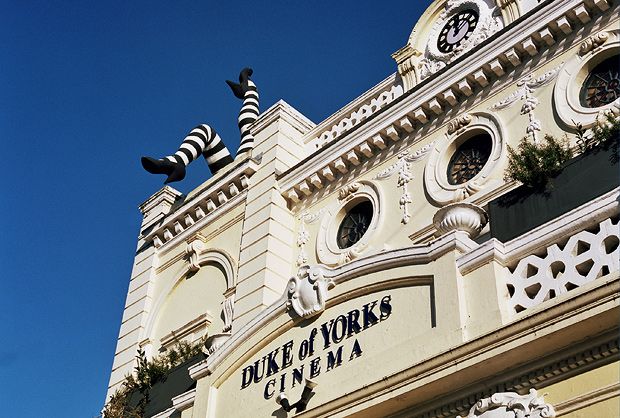 Opened in 1910, the Duke of York's claims to be the oldest purpose-built cinema in the UK, having served continuously as a cinema since then. It caters for everyone with special nights of autism-friendly screenings as well as Kids' Club, Silver Screen showings and Big Scream screenings for those with small babies.

There are adapted toilets available and, apart from the first floor bar and balcony seating, the building has full wheelchair access.

Located in central Brighton, the cinema is within walking distance from Brighton station. A local landmark just off London Road, look out for the kicking legs!