Add to favourites
57–58 Walton Street, Oxford, OX2 6AE
Photo of Phoenix Picturehouse
Whilst every effort has been made to ensure the information displayed here is accurate, always check with the venue before attending (especially during the Covid-19 pandemic).

The Ants and the Grasshopper

Screening of a documentary investigating the question: how do the roots of change grow? Screening as part of Take One Action Film Festival 2021.

A young sailor must find a way to buy the boat that he and his father built.

Thief Sook-Hee (Tae-ri) is hired to pose as a maid to wealthy heiress Hideko (Min-hee) as part of a con trick, but then maid and heiress discover mutual passion. This loose adaptation of Sarah Waters's Fingersmith is bravura filmmaking, but while the emotion between the two women is vibrant, an extended sex scene is exploitative, and the plot is too convoluted.

An amateur archaeologist sets out to find the lost remains of Kind Richard III.

Given the troubled production history of Lynch's nightmare noir – it was originally a pilot for a US television series which was cancelled – it's nothing short of miraculous that Mulholland Drive shines with the filmmaker's idiosyncratic brilliance. Although set in the present day (albeit with retro styling), Lynch draws on his fascination with 40s and 50s Hollywood and its secret history of crime, here involving two actresses, amnesiac Rita (Harring) and amateur sleuth Betty (Watts). The proceedings veer into the kind of waking nightmare territory that either flummoxes or delights viewers, as Lynch mixes the bizarre and almost laughable with the moments of electrifying fear.

National Theatre Live: Much Ado About Nothing

Escape to the Italian Riviera with a cast including Katherine Parkinson and John Heffernan.

Since 1931, the legendary family-run Hotel Messina has been visited by artists, celebrities and royalty.

When the current owner’s daughter falls for a dashing young soldier, the hallways are ringing with the sound of wedding bells.

However, not all the guests are in the mood for love, and a string of deceptions soon surround not only the young couple, but also the steadfastly single Beatrice and Benedick.

The Night Is Short, Walk On Girl

An animated romantic comedy based on the novel by Tomihiko Morimi. Senpai tries to confess his feelings for an unnamed junior in his college and keeps bumping into her on purpose.

Octonauts and the Great Swamp Search

The Octonauts journey to the Everglades to help track down several invasive species including a python and her babies.

Puccini's opera about a young geisha falling in love with an American naval officer.

Young Richard of Gloucester uses the chaos of the Wars of the Roses to begin his unscrupulous climb to power in this classic Shakespearean history of a king in the throes of jealousy and murder. Despite being manifestly unfit to govern, he overcomes each obstacle in his way to seize the crown, as King Richard III. But as those around him turn against him, and as his plans begin to unravel, where else can he turn as the Lancastrian opposition returns to drag the country into battle once more and put an end to Richard’s tyrannical rule. Richard III is a savagely comic analysis of the exercise of power, reminding us of the dangers of tyranny and our duty not to let it go unchecked.

See How They Run

A murder mystery begins in the West-End, as a group investigate the untimely death of a cast member.

Shrek will have Walt Disney turning in his cryogenic freeze tank. This truly subversive animated film takes pot shots at fairytale mythology, while singling out Uncle Walt's beloved Snow White, Cinderella, Pinocchio, et al. Under the guise of a quest to rescue a princess from a dragon undertaken by the eponymous green ogre (which kids will love), Shrek also ruthlessly pillages corporate Disney, satirising its theme parks and executives. And who's behind all this? Producer Jeffrey Katzenberg of Disney rival studio DreamWorks, also formerly head of, yep, Disney.

A couple rent out a luxury villa, but when they arrive, the pool is 'broken'. Ignorant of the island's water shortage, they call in a repair person for help but paranoia soon takes over. 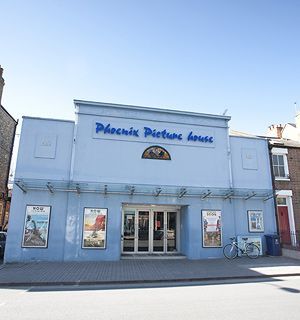 The Phoenix Picturehouse screens a diverse and interesting mixture of arthouse, independent, quality mainstream and foreign cinema to ensure a stimulating diversity. The fully licensed roof-top bar is a welcome addition to this two-screened cinema.

Both screens are accessible by wheelchair, but the bar is not. Adapted toilet facilities are available.

Oxford Railway Station is a 15 minute walk away, via Cranham Street.