Add to favourites
Salway Road, London, E15 1BX
Photo of Stratford East Picturehouse
Whilst every effort has been made to ensure the information displayed here is accurate, always check with the venue before attending (especially during the Covid-19 pandemic).

Cuba looks a little like the land that time forgot. A theme Wenders brings out both in the over-exposed images of Havana and also in the musical brilliance of these octogenarian and nonagenarian musicians who have for so long been neglected. And it's ironically thanks to an American, Wenders' regular musical collaborator Ry Cooder, that their careers have been resurrected.

A girl frustrated with her lazy boyfriend goes with her friends to seek out something better.

Beautiful, fashionable and streetsmart Beverley Hills schoolgirl Cher (Silverstone) is spoilt to distraction, but when teenage romance floors her, she's as clueless as anyone. This has all the ingredients for an unashamedly brainless smash teen comedy – including a new line in kooky dialect – but unfortunately it doesn't do anything that *3Heathers2 didn't do better.

When Superman and the rest of the Justice League are kidnapped, Krypto the Super-Dog (voiced by Dwayne Johnson) must convince a rag-tag shelter pack - Ace the hound, PB the potbellied pig, Merton the turtle and Chip the squirrel - to master their own newfound powers and help him rescue the superheroes.

The Red Ribbon army return to seek revenge on Goku and his gang.

Fisherman's Friends: One and All

The buoys are back in town! Follow the true story of the Cornish folk music group Fisherman’s Friends and their next real-life adventure - performing at the 2011 Glastonbury Festival alongside the likes of superstars like Beyoncé in a charming British comedy that features winning turns from the likes of James Purefoy, Dave Johns and Maggie Steed.

Based on the true story of Chol Soo Lee, who was wrongly convicted of murder.

In 1993, 16-year-old Brandon Lee enrolled at Bearsden Academy, a secondary school in a well-to-do suburb of Glasgow, Scotland. What followed over the next two years would become the stuff of legend. Brandon had been privately tutored in Canada while he accompanied his mother, an opera diva, on tour before her tragic death. The preternaturally bright student surprised teachers by blazing toward his goal of entering medical school, displaying a wealth of knowledge beyond his years. Brandon found friends despite his initial awkwardness. He took bullied students under his wing, introduced classmates to seminal retro bands, and even starred in the school's production of South Pacific. But then his unbelievable secret was revealed. Filmmaker Jono McLeod returns to his old school for a nostalgic look at the strange but true story of his former classmate, Brandon Lee. Utilizing playful, period-specific animation, a pitch-perfect soundtrack, the memories of students and teachers, and the talents of Alan Cumming to bring the tale to life, My Old School offers more than one surprise along the way.

Tessa is a young, brilliant barrister. She has worked her way up from working class origins to be at the top of her game; defending; cross examining and winning. An unexpected event forces her to confront the lines where the patriarchal power of the law, burden of proof and morals diverge. Prima Facie takes us to the heart of where emotion and experience collide with the rules of the game.

The residents of a remote Californian valley make an unsettling discovery.

A special screening of the popular kids show.

A Shaun the Sheep Movie: Farmageddon

Shaun and his gang of sheep are getting up to mischief that puts them at odds with sensible sheepdog Bitzer; then an alien craft arrives. This dialogue-free pristinely shambolic stop-motion romp is, in its deft way, a crowd-pleaser for everyone, with enough Close Encounters references to keep parents interested.

The Star Trek franchise lurched back to life with this ambitious and great-looking but incredibly slow-moving debut flick; sequels honed the formula, but this first one consists largely of Kirk, Spock, Bones and the gang peering wonderingly at viewscreens.

Where the Crawdads Sing

Where The Crawdads SingOlivia Newman | USA | 2022 | 130m | 15Mystery drama based on the novel by Delia Owens about Kya, an abandoned girl who raised herself to adulthood in the dangerous marshlands of North Carolina. For years, rumours of the 'Marsh Girl' haunted Barkley Cove, isolating the sharp and resilient Kya from her community. Drawn to two young men from town, Kya opens herself to a new and startling world; but when one of them is found dead, she is immediately cast by the community as the main suspect. As the case unfolds, the verdict as to what actually happened becomes increasingly unclear, threatening to reveal the many secrets that lay within the marsh. 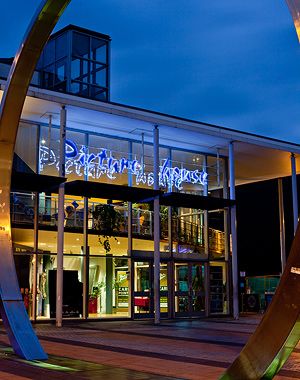 The building housing this four screen cinema has won numerous architectural awards since it opened it 1997. Features of the venue include stadium seating, THX sound in the main auditorium and 3D projection.

With no parking directly beside the venue, there are 4 spaces for Orange Badge holders at the Pay & Display car park on Salway Road immediately behind the cinema.

The Picturehouse is a short walk from Stratford Station which is part of the Overground Central Docklands Light Railway, Jubilee Underground network, Overground & National Rail lines.

To get the Picturehouse from Stratford train and bus station cross the road and walk through Stratford Shopping Centre (the shopping centre directly opposite the station), turn left at the central atrium, following the signs for the cinema and the Theatre Royal exit.