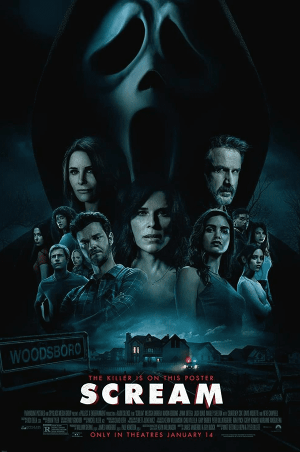 Twenty-five years after a streak of brutal murders shocked the quiet town of Woodsboro, Calif., a new killer dons the Ghostface mask and begins targeting a group of teenagers to resurrect secrets from the town's deadly past.

The makers of the new 'Scream' film have urged fans not to share spoilers on social media. The latest movie in the horror franchise will be released this week and executive producer Chad Villella and co-director Matt Bettinelli-Olpin have taken to…

Courteney Cox could "really feel Wes Craven's presence" on the set of the new 'Scream' movie. The 57-year-old actress is set to reprise her role as Gale Weathers in the upcoming fifth film in the horror franchise – which is simply titled 'Scream' – and…

Neve Campbell: Reuniting with Scream stars was like going back to summer camp

Neve Campbell says reuniting with her 'Scream' co-stars was like going back to "summer camp". The 48-year-old star will reprise her role as Sidney Prescott in the forthcoming fifth film in the slasher series – which is titled 'Scream' – and she loved…

'Scream' will be a "love letter" to the late Wes Craven. The fifth movie in the franchise will be the first not helmed by the legendary horror filmmaker – who died in 2015 – but directors Tyler Gillett and Matt Bettinelli-Olpin were keen to honour Wes…

Courteney Cox wouldn't have returned for 'Scream 5' if it had been a sequel. The 57-year-old actress is set to reprise her role as Gale Weathers in the upcoming fifth film in the horror franchise – which is simply titled 'Scream' – and she admitted…

Kevin Williamson loves the "fresh approach" of 'Scream 5'. The 55-year-old screenwriter has returned to the slasher series to produce the latest movie, and he's admitted he loves the blend of modernity and nostalgia in the upcoming flick. Speaking at a…

Kyle Gallner has teased that 'Scream 5' has similarities to the original film. The 33-year-old actor is set to feature in the horror flick in an undisclosed role and he has assured diehard 'Scream' fans that it will have the "magic" of the original…

Jenna Ortega says 'Scream 5' "fits perfectly" with the rest of the franchise. The 17-year-old actress has been cast in an unconfirmed role for the upcoming horror film along with original stars Neve Campbell, David Arquette and Courteney Cox, and she…

It's official: Neve Campbell set to return for Scream 5

Neve Campbell has confirmed she's set to return for 'Scream 5'. 'Ready or Not' filmmakers Matt Bettinelli-Olpin and Tyler Gillett are rebooting the late Wes Craven's slasher franchise with a fifth instalment, and the Sidney Prescott actress has admitted…

Neve Campbell has confirmed she's set to return for 'Scream'. 'Ready or Not' filmmakers Matt Bettinelli-Olpin and Tyler Gillett are rebooting the late Wes Craven's slasher franchise with a fifth instalment, and the Sidney Prescott actress has admitted…

David Arquette says 'Scream 5' is in "good hands" with Matt Bettinelli-Olpin and Tyler Gillett. The 'Ready or Not' filmmakers are rebooting Wes Craven's horror franchise and, although star David misses Wes – who died in 2015 – he feels confident that…

'Scream 5' will be released on January 14, 2022. The upcoming movie – the latest in the horror franchise series – has received an official release date, and it was announced with a message on Twitter, which stated: "On January 14, 2022... We're going to…

Melissa Barrera to star in Scream 5

Melissa Barrera has joined the cast of 'Scream 5'. The 30-year-old actress is attached for the upcoming horror flick along with returning stars David Arquette (who plays sheriff Dewey Riley) and Courteney Cox (Gale Weathers). According to reports…

David Arquette hopes that Neve Campbell will join the cast of 'Scream 5'. The 48-year-old actor will reprise his role as sheriff Dewey Riley in the upcoming film and is hopeful that Neve – who is "in negotiations" to appear in the movie – will also…

Courteney Cox signs up for Scream 5

Courteney Cox will reprise her role as Gale Weathers in 'Scream 5'. The 56-year-old actress will join her ex-husband David Arquette, 48, who plays Sheriff Dewey Riley, in the upcoming movie; the latest instalment in the series, which started with the…

David Arquette won't give away any spoilers for 'Scream 5'. The 48-year-old actor will reprise his role as Dewey Riley in the upcoming horror movie and joked that he would be visited by series villain Ghostface if he gives away any details about the…

Neve Campbell wants to star in another Scream movie

Neve Campbell is keen to star in another 'Scream' movie. The 46-year-old actress has revealed she is open to returning to the money-spinning slasher film franchise, although she admits nothing has been agreed as yet. She shared: "'Scream' is coming…

Neve Campbell admits it feels strange to be considering 'Scream 5' without Wes Craven. The legendary director – who created the 'Scream' franchise – passed away in 2015 at the age of 76 and Neve admitted she was hesitant to even think of returning to…

Neve Campbell in talks for Scream 5

Neve Campbell is in "negotiations" for a fifth 'Scream' movie. The 46-year-old actress is set to reprise her role as Sidney Prescott in a new installment of the slasher film franchise but admitted the project is currently on hold due to the coronavirus…

David Arquette would jump at chance to return for Scream 5

David Arquette would love to reprise his role as Officer Dewey Riley in the fifth 'Scream' film. The 48-year-old actor says he's not yet been contacted by Gary Barber's Spyglass Media Group, who are developing the first 'Scream' film since 2011, and…