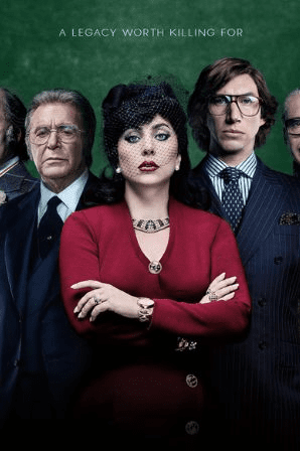 The turbulent marriage and divorce of Patrizia and Maurizio Gucci, the head of the Gucci fashion house, leads to murder.

When Patrizia Reggiani, an outsider from humble beginnings, marries into the Gucci family, her unbridled ambition begins to unravel their legacy and triggers a reckless spiral of betrayal, decadence, revenge, and ultimately…murder.

Tom Ford was "deeply sad" for days after seeing 'House of Gucci'. The former Gucci creative director admitted he found it "hard to see the humour and camp" in Sir Ridley Scott's film because he was so close to the scandal, though he still believes the…

Lady Gaga: I needed to use Italian accent at all times for House Of Gucci

Lady Gaga thought it was "extra important" to adopt an Italian accent in everyday situations for her role in 'House Of Gucci'. The 35-year-old star features in Ridley Scott's new flick, which tells the story of Patrizia Reggiani (Gaga) – who was…

Adam Driver took a pair of Gucci shoes home from the 'House of Gucci' set, but he snubbed the suits. The 38-year-old actor plays Maurizio Gucci, one-time head of the fashion house, in the movie, and while he decided to treat himself to a pair of Gucci…

Sir Ridley Scott had a "very good marriage" working with Lady Gaga on 'House of Gucci'. The 83-year-old filmmaker was very impressed by the 'Poker Face' singer's work ethic and thinks the 35-year-old star – who plays Patrizia Reggiani – has made a much…

Lady Gaga thinks it is wrong to describe her 'House of Gucci' character as a "sexy gold digger". The 35-year-old star plays Patrizia Reggiani – who was convicted for hiring a hitman to kill her ex-husband Maurizio Gucci (Adam Driver) – in Sir Ridley…

Salma Hayek has hailed her 'House of Gucci' co-star Lady Gaga as an "incredibly talented" actress. The 'A Star is Born' actress stars in the hotly-anticipated Sir Ridley Scott movie as Patrizia Reggiani, fashion trailblazer Maurizio Gucci's ex-wife who…

Jeremy Irons has boarded Sir Ridley Scott's star-studded 'Gucci' movie. Deadline reports that the Hollywood veteran is the latest name attached to the true crime drama, which is based on the murder of fashion trailblazer Maurizio Gucci in 1995. It's not…

Robert De Niro, Al Pacino, Adam Driver and Jared Leto are in talks for Sir Ridley Scott's 'Gucci' movie. The true crime drama, which is based on the murder of fashion trailblazer Maurizio Gucci in 1995, looks set to boast a major cast, following a…

Ridley Scott's 'Gucci' will be released in 2021. According to The Hollywood Reporter, MGM have acquired the rights to the project, a true crime drama based on the murder of fashion trailblazer Maurizio Gucci in 1995, and have set its release for…

Lady Gaga is set to star in a movie about the Gucci fashion family. The 33-year-old singer and actress is teaming up with director Sir Ridley Scott for the untitled venture, which will reportedly follow the tumultuous Gucci family and the murder of…