Sequel to the 2016 film about an animal talent show. 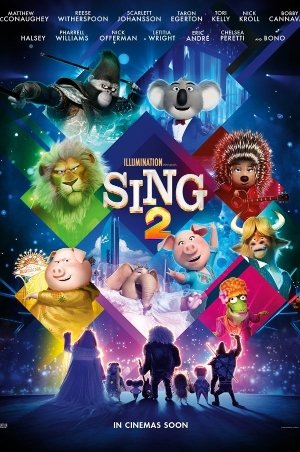 Can-do koala Buster Moon and his all-star cast of animal performers prepare to launch their most dazzling stage extravaganza yet… in the glittering entertainment capital of the world.

Spike Jonze has a secret role in 'Sing 2'. The 52-year-old actor-and-director isn't in the credits alongside the likes of Matthew McConaughey, Reese Witherspoon, Scarlett Johansson, Bono, and Taron Egerton for the animated sequel, but filmmaker Garth…

U2 preview new song on TikTok from SING 2

U2 have previewed a new song on TikTok. Bono and co gave fans a taster of the upcoming track ‘Your Song Saved My Life’, which will soundtrack the animated movie sequel 'SING 2', as they joined the video-sharing platform this week. The 61-year-old…

Bono has joined the cast of 'Sing 2'. The U2 frontman will make his animated movie debut in the forthcoming film, which will also see Pharrell Williams and Halsey join reprising stars Matthew McConaughey, Reese Witherspoon, Taron Egerton, Scarlett…