Willis plays a cop who attends a tower block Christmas party with his estranged spouse. The building is raided by terrorists, so it's left to Willis to bump off the baddies and save the hostages while the police and FBI languish ineptly on the sidelines. Unbearably tense actioner that gets good mileage out of yawning lift-shafts and flying bullets, while Willis is convincing as an ordinary guy trying to cope with it all. Watch out for Brit Rickman as a villain with a sense of humour. 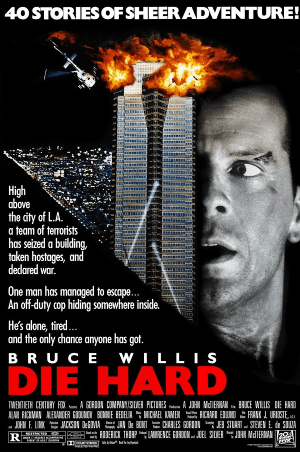 One of the greatest action movies ever made opens with a festive setting as NYPD officer John McClane (Bruce Willis) takes on Alan Rickman’s archetypal European villain, Hans Gruber. When McClane goes to the Christmas party at his estranged wife’s office “by mistake”, he find himself embroiled in an action-packed rescue mission to save the hostages being held by Gruber as he attempts to steal 600 million dollars. Yippee-ki-yay!

John McTiernan has declared ‘Die Hard’ was never intended to be a Christmas movie. The director of the 1988 flick, starring Bruce Willis as cop John McClane, gave his opinion on the long-running debate over whether it is a festive film four months…

The 'Die Hard' Christmas film debate continues to rage over three decades after the movie's release. It has long been argued that the 1988 flick – that is set on Christmas Eve and stars Bruce Willis as NYPD detective John McClane – is a festive flick…

'Die Hard' director John McTiernan is adamant that the action classic is a Christmas movie. The 69-year-old filmmaker helmed the 1988 action film which stars Bruce Willis as NYPD detective John McClane, who is caught up in a terrorist takeover of a Los…

Alan Rickman was spat at by members of the public after he played a terrorist in 'Die Hard', according to 'Bill & Ted' star Alex Winter. The late actor – who died at the age of 69 in 2016 – was famous for his role as villain Hans Gruber in the 1988…

Die Hard most rewatched movie of all time

'Die Hard' has been revealed as one of the most rewatched films of all time. The 1988 action flick – which stars Bruce Willis and Alan Rickman – as well as 'Dirty Dancing' and 'The Wizard of Oz' are the most popular films for viewers to revisit…