Buddy (Ferrell) is a big Elf who, though accepted in his Elvish community at the North Pole, manages to wreak havoc on a daily basis. Fed up and confused by his charge, Papa Elf (Bob Newhart) sends him to the US in search of his true identity. Hilarious and puerile Yuletide comedy. 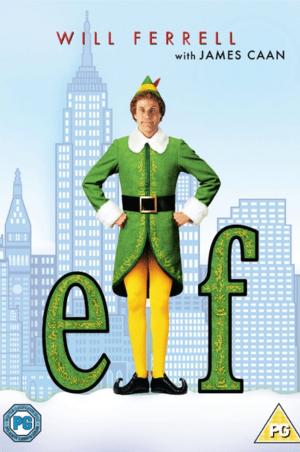 Enjoy Elf on the big screen this year and meet our very own Customs House elves, who will make sure you feel welcome with a gift and tasty treat.

Will Ferrell turned down a $29 million offer to star in an 'Elf' sequel. The 54-year-old actor appeared in the 2003 festive film as Buddy Hobbs, a human who was raised by Santa's elves, but he rejected the chance to make a follow-up movie because the…

James Caan has revealed that an 'Elf' sequel "will never happen" because of tension between Will Ferrell and director Jon Favreau. 'The Godfather' star played the father of Ferrell's character Buddy Hobbs in the festive classic and explained that he and…

Will Ferrell feared Elf would end his career

Will Ferrell feared his career would be "over" when he starred in 'Elf'. The 48-year-old comedian and actor has joked that he worried the movie would be the end of his acting career if it hadn't become a smash hit. He said: "I was literally filming that…

Jon Favreau still hasn't made any money from 'Elf'. The 48-year-old actor-and-director made the festive comedy - which stars Will Ferrell - in 2003 and despite the fact it is regularly repeated on TV around the world over the Christmas period, he…

Hugh Jackman watches 'Elf' with his family every year at Christmas. The 'Wolverine' star looks forward to sitting down his wife, Deborra Lee-Furness and their adopted children Oscar, 13, and Ava, nine, to watch festive movies and although they try new…

Will Ferrell feels too old for Elf sequel

Will Ferrell has refused to star in a sequel to festive favourite 'Elf'. The 'Anchorman 2' star thinks he is too old to dress like an elf once again and would look "pathetic" in costume if he reprised his role for a sequel to the 2003 comedy in which he…